It's the 15th, and I am just now finishing up this post!  My final set of 2015 books.  I ended up reading about 100 books this year.  I hate that I didn't do these posts from the very beginning, because I now love keeping track of what I have read (and my thoughts on the book!).  I did just start bullet journalling, so I will have complete lists from now on. This was a reread, but one of only a few rereads from 2016.  This book came out right before Gil was born, and I loved it then. But I hadn't picked it up again, and I wanted to close out the year with it.  Louise Penny is one of my favorites.  I actually finished this book on the 31st, which was a perfect ending to the year.

Another middle level book.  There will be lots of these this coming year as I try to stay on top of recent releases and figure out what I want to teach from.

I enjoyed The Doldrums a lot.  I think if you liked A Series of Unfortunate Events or The Mysterious Benedict Society, this would be a fun book to read.  This book is on some awards lists, and I think there will be a follow up as well.  Archer, the main character, is the grandson of famous explorer who are presumed dead.  His parents are terrified of anything outside of the norm, but Archer is dying to be an explorer and find his grandparents.

The Cavendish Home for Boys and Girls

Another middle level award winner.  Not the best middle level book I've read this year, but a page turner.  If you know a middle level reader who likes suspense, this would be a good recommendation.    Victoria is a student in a picture perfect world.  She likes to be the best, always.  But she starts noticing that people are going missing and decides to figure out what is happening to them.  Lots of "march to the beat of your own drum" messages here.

Magnus Chase and the Hammer of Thor 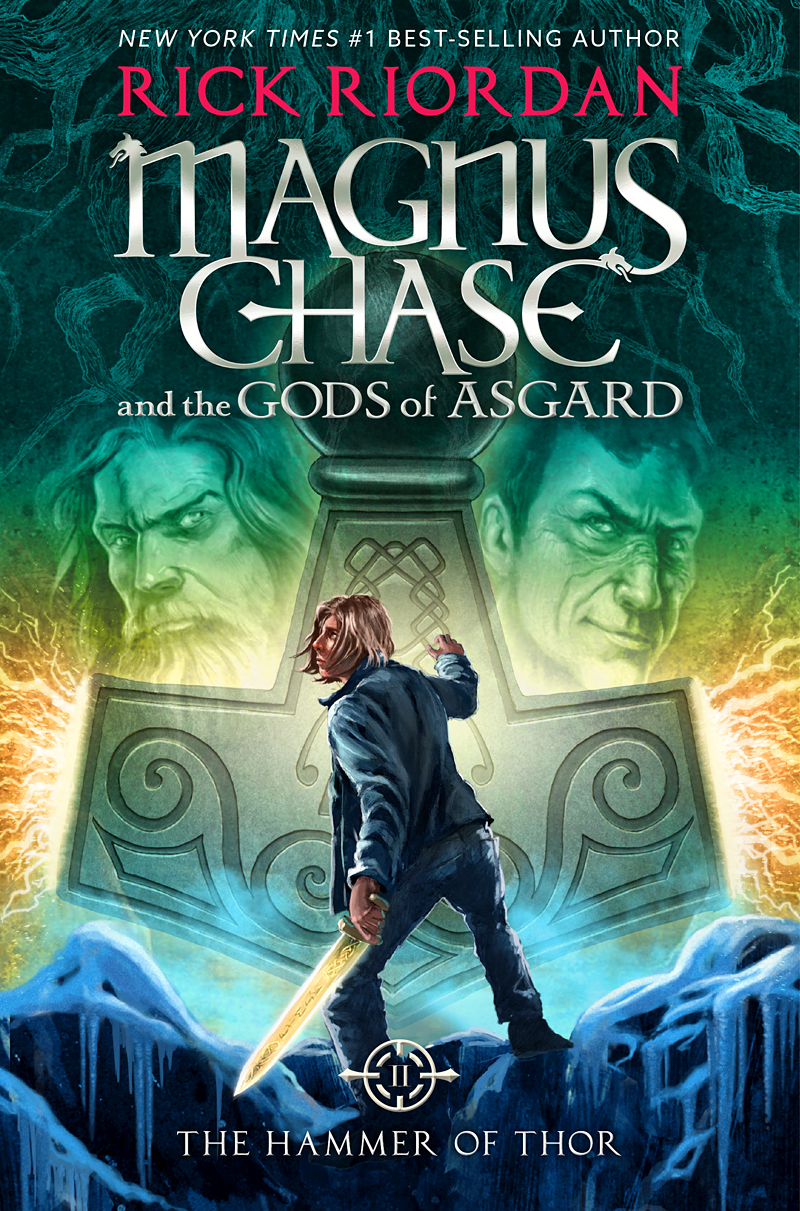 I have always been a fan of Rick Riordan.  I think he does a great job at getting kids excited about history and mythology!  Magnus Chase is his newest demigod hero, a son of the Norse god Frey.   In this book, Magnus Chase is searching to find the lost hammer of Thor.

Warning to parents, as Riordan's characters grow older, they deal with more complex issues.  If you have a younger reader who really wants to read the Magnus Chase books, I would read it alongside them, so that you can talk about any themes with them.

This book is being compared to Girl on a Train, which I suppose is a far comparison.  But that comparison made me doubt the narrator a lot, and that is far from the case with this book.  What She Knew is about the kidnapping of an 8 year old son and the mom's search to find him.  I thought it was really good and definitely a page turner.  But I didn't think that unnecessary elements were added just for the sake of suspense, which is the case with a lot of other similar books.  I liked this book a lot. My (in my dreams) best friend, Ann Bogel, recommended this book on one of her podcasts.  It's about a marriage that is falling apart after the death of a child.  I've mentioned before that I don't need an intense or fast paced plot.  I really enjoy more beautiful writing or good character development.  This book delivered in the character department.  I really enjoyed reading it.

That being said, I don't feel the need to read more Anne Tyler, so maybe I didn't love it that much?  Any Anne Tyler fans out there?

The Reader's of Broken Wheel Recommend

This was a fun and quirky read.  Sara travels from Sweden to a SUPER small town in Iowa to visit her pen pal, who died right before she came there.  She ends up opening a little book shop and trying to make readers out of all of the residents of Broken Wheel, Iowa.  The town falls in love with her and create an elaborate plan to get her to stay.  Not the best book I've read this year, but not too bad. 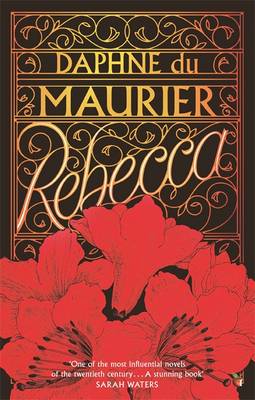 After hearing this talked about my Ann Bogel multiple times, I finally gave it a try.  And goodness was it good.  Imagine Great Gatsby meets Jane Eyre.  I could not put this book down.  It's a chillingly beautiful story.  I am sure I will reread this at some point in the future.

Alright, that's the last of my 2015 books.  This month is already looking like it will be a little slower.  I am doing the 2017 Reading Challenge, and I am upping my classics so that will mean a little less reading (because they often take longer to read).

Posted by Bech and Marley Evans at 10:49 AM 0 comments

I'm going to jump on the bandwagon with one of those caveats:  LOTS OF PICTURES AHEAD!

Seriously, though, I tried to slim down the amount of pictures.  I really did.  But this blog is basically my digital scrapbook, so this is the best I could do!

As Jack likes to point out, the boys got THREE Christmases this year.  They opened some presents from Bech and me the Thursday before we flew to Mississippi. 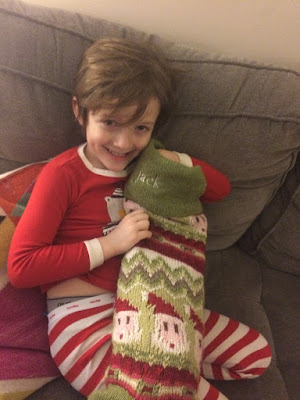 Early in December, Pottery Barn Kids put all of their stockings on sale for half price.  I still didn't have stockings for the boys (I have just been using some red velvet Pottery Barn ones that I bought years ago for Bech and me), so I jumped on that sale.  Here is Jack modeling his new stocking.

And, of course, they're Fair Isle! 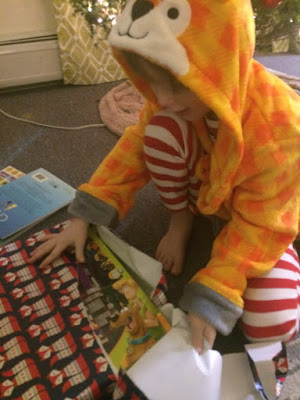 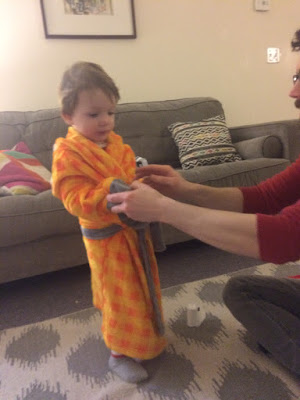 And Gil is opening up his something to wear.  He loves to wrap a towel around himself like a robe, so I bought the boys matching Cat & Jack robes from Target.

We flew out two days later.  We spent our time between New Orleans, Brookhaven, and Jackson, and got to see all of our family! 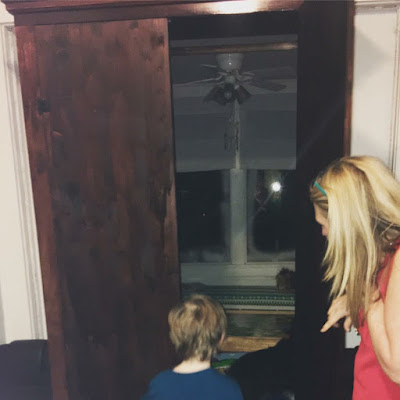 The first night we spent in Brookhaven, and Jack and Gil got to see a big surprise at Bella and Doc's house...NARNIA!

In my parents house, there is a small children's den that leads onto a sun room.  My parents had an old wardrobe converted and then made the sunroom into a playroom.  Now you walk through the wardrobe to get into a really cool playroom.  Jack and Gil (and their baby cousin, Anne Douglas) LOVE it! 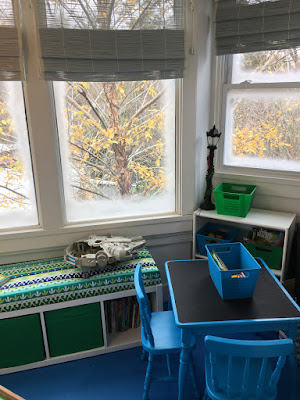 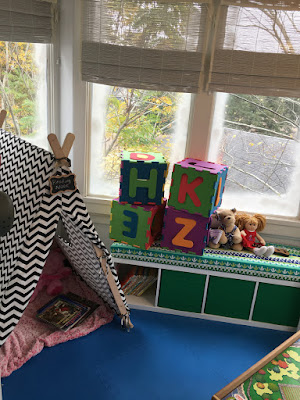 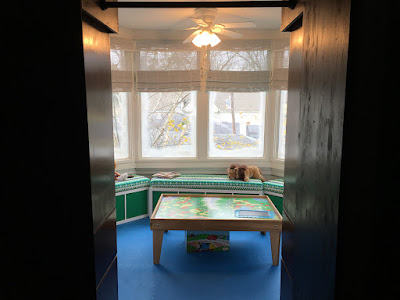 Looking in through the wardrobe doors 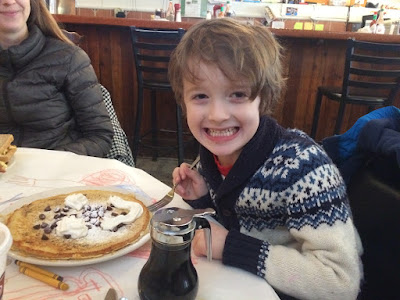 We spent a coupe of days with Bech's family, some time with my family, and then back to Bech's family for the last bit.  Here's Jack, chowing down on some pancakes in NOLA.  Doesn't he look SO old here? 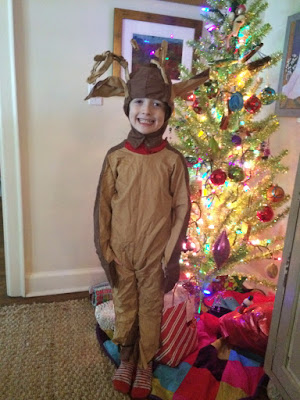 And here he is wearing Bech's mom's reindeer outfit that she wore when she was five! 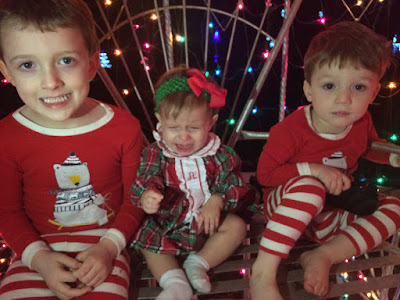 In Brookaven, we checked out some amazing Christmas light displays. 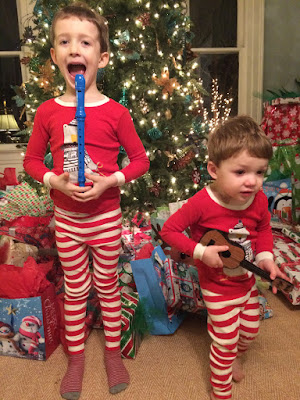 And opened some presents early. 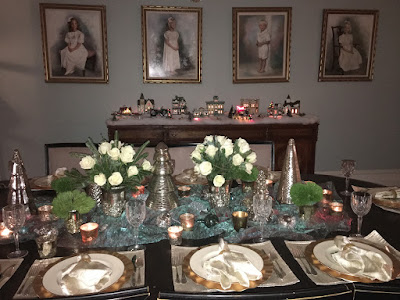 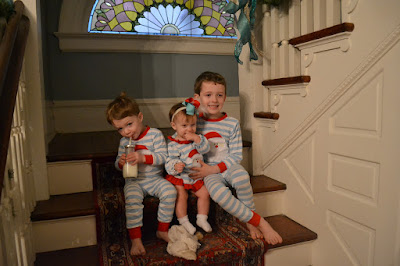 All the cousins on the stairs on Christmas morning (well, you know, Christmas Eve morning). 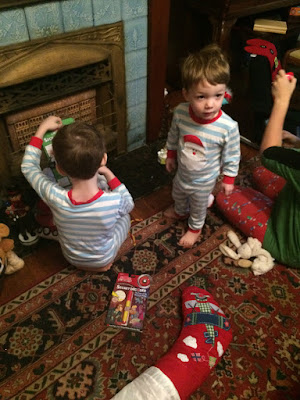 And then opening their stockings (my mom might have taken advantage of that same Pottery Barn Kids stocking sale, too...). 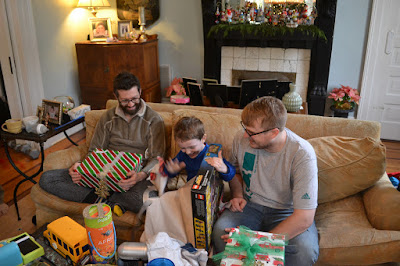 This is the first year that Jack has really really wanted a specific present...Lego Jokerland.  Here he is opening it (and then being told that he could not put that together until we were back in Vermont!). 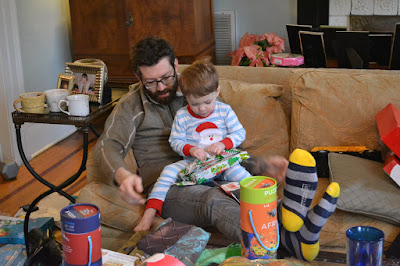 Gil didn't want anything specifically, but he did have a lot of fun opening presents! 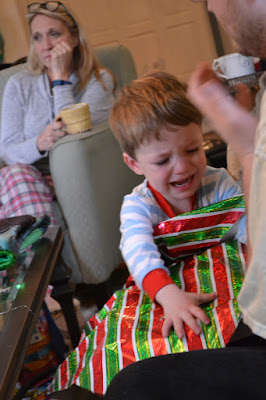 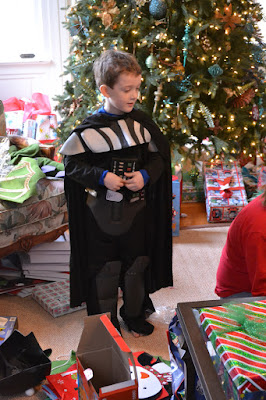 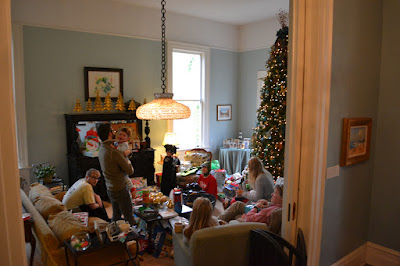 My brother-in-law took this cool shot from the foyer.  Actually, Dave is pretty much the reason that we have any Christmas Day shots.  I think it's because it's his daughter's first Christmas.  Thanks, Dave.  I am the worst at remembering to take pictures. 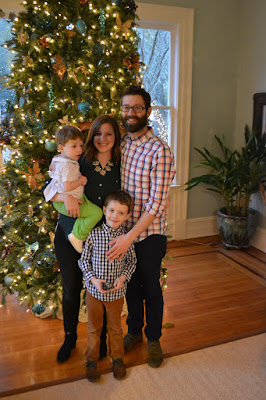 After a full day of opening presents, eating a yummy brunch, and playing with toys, we headed to our church's Christmas Eve service, one of my favorite parts of Christmas every year.

After church and a quick stop to a family friend's house for a party, we headed up to Jackson for another Christmas. 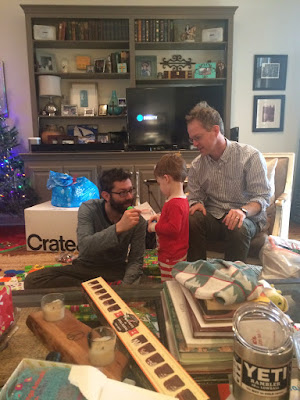 Dave is married to my sister, thus Dave was not there to take pictures at my in-laws.  You will notice pretty quickly.  I'm just proud I remembered to snap two pictures! 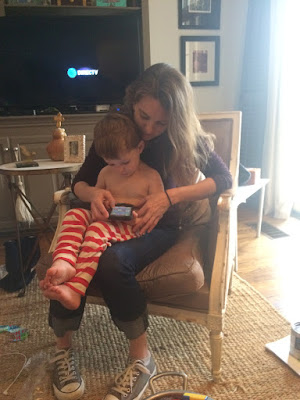 Jack and Gil both had a blast opening presents, checking out their stockings, eating brunch, and playing with new toys.


We stayed for one day after Christmas and then headed home last Tuesday morning, bright and early. We had a great trip, full of Target, Sonic, CFA, and lots of family (and maybe a sushi dinner thrown in...).  We did get a walking pneumonia diagnosis for Jack the day after we came back.  Not the best welcome home present!  But he's better, we're unpacked, and this semester officially started today!

SaveSave
Posted by Bech and Marley Evans at 6:51 PM 0 comments