less than one month!

First, an update on Malawi...It is winter right now and it is COLD! Okay, so I might be exaggerating a tad bit. It can still get warmish during the day. But at night and the early morning, it is pretty cold. Think late October/early November in Mississippi. I am glad I packed at least one pair of flannel pj's!

Rainy season is officially over, proven by the below pictures. Malawi looks like it did when we arrived last August. The fields are bare and starting to look pretty dusty. We can smell the fires in the morning and at night as people are cooking their nsema for meals. All of the maize has been cut down to feed the people for the next year. And the mice on a stick are back!!! 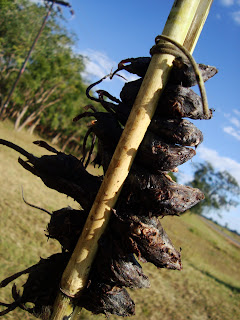 Here is a close up of mice on a stick. Men burn out the grasses in fields to catch the mice, tie the mice to a stick, then cook the mice. Some people love to eat it (Bech and I are not part of that "some people"). Actually, a few ABC missionaries have tried this "delicacy." 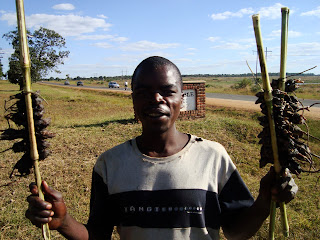 During the dry season, men often stand at the corner to ABC (not because of its proximity to the college, just its a good place to sell things) with the mice. YUM!

Last night, we had the Ballet and Band Recital...It was so great! I will be posting some pictures later today or tomorrow! My girls looked so beautiful and did such a great job! I was so proud of them. The power went out, but it was right before the 2nd ballet song, and the generator came on in a few minutes. Other than that, everything went smoothly.

I can now cross that off of my to-do list! I have a bunch of other things to do, though! We got a calendar of events for the next few weeks, and it is FULL! Today is high school graduation, tonight we are going to the Copper Pot with friends, tomorrow is a college function (plus I am working on the yearbook all day tomorrow)! Then next week is crazy busy! Not to mention, we have to finish selling our things and packing!

In a month from today, we will be home! Actually, I have very specific plans for today. I want to wake up in my bedroom (I mean, I'm almost 24 and married, so its kinda not really my bedroom anymore, but I still love it) in Brookhaven. I will go downstairs in my pj's and eat cheese grits, made by my mother. Then I will go to Wal-Mart. I will probably be very freaked out and overwhelmed by the enormity of Wal-Mart and all of the different options, but I haven't been shampoo shopping in a year. And one of my favorite things to do in the world is stand in the shampoo aisle of Wal-Mart and smell all of the shampoos (even though I usually end up buying the same one I had before)...Bech hates this little ritual of mine, but that's why I won't take him on my 1st day home Wal-Mart trip. But the best part of it all is that we will be with our families!!! We can't wait to see everyone!

Posted by Bech and Marley Evans at 2:59 AM

I wish I could see you go back to WalMart for the first time. That would be awesome. :)