Jack is now 5 months!  Actually, I took these pictures 3 days after his birthday, but I wanted him to be wearing his Thanksgiving outfit.

I have no idea how much he wears now, but I am sure it is a lot.  I would bet we are at 19 lbs.  He does seem to have slowed down a bit in the gaining. 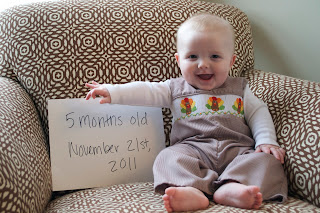 About 2 weeks ago, we switched Jack to a 4 hour schedule.  He is doing amazing on it!  And I love it, because it's one less pumping session for me during the day.  So now Jack eats every 4 hours.  His last regular eating time is at 7, and then we sneak in a dream feed at 9:45.  But last night, I moved it down to 9:30 and he did great.  He is getting so close to dropping the dream feed, but I am a little sad.  I love going in there and cuddling with him while he's sleeping.

Jack is in size 3 diapers (and in the 2nd rise on his bumgenius') and wears size 6-9 month cloths. 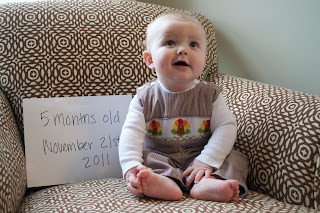 In the past week, Jack has developed a new skill--sitting up!  Jack can now sit up on his own.  You have to spot him, though, because he will get tired and just plop right over.

He also officially started to teeth.  Nothing is poking through yet, but he is a little fussy and will gnaw on anything he can get his hands on.

Jack had another big month.  His "KK" came to visit, he saw his first snow, he visited Stowe twice, and he has his first Thanksgiving! 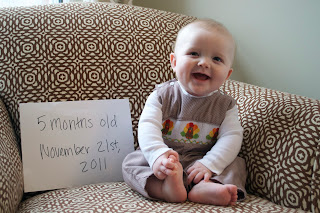 Likes:  being tickled by his Daddy, cuddling, bath time, his Aunt KK

And for a little comparison, here are Jack's last four month pictures! 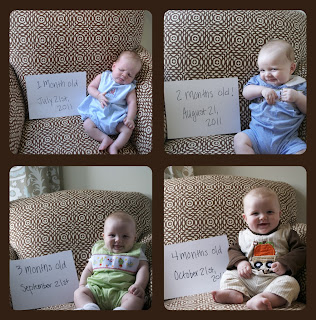 Posted by Bech and Marley Evans at 7:23 AM