I have been a bad blogger lately. I got back at 11:30 p.m. on Monday from DC, and had to be at work at 8 on Tuesday morning. Plus, I had a Latin test on Tuesday and regular homework. But now I finally have a little bit of a rest before I start back up on next weeks homework.
DC was great. One of my favorite things was getting to go into the senate on Friday. They were in recess, but we were able to go onto the floor and see everything. Ansley showed us around the Capitol, and we ate in the Senate cafeteria.
Speaking of eating, we did that, a lot. My favorite place we ate (well actually it was on Sunday night, so it was just my mom and me) was Ping Pong Dim Sum. Sooo good! We also ate some Tangy Sweet, some cupcakes, and a Krispy Kreme doughnut (okay, so only I ate one!). 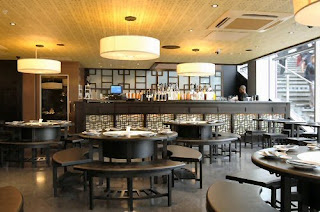 (Ping Pong Dim Sum)
We mostly just shopped, but I did get to do a little sightseeing on Monday. My mom left to head home about noon, so I headed over to the Museum of American History. My favorites: Dorothy's ruby red slippers (no matter how many times I see them, I still love them), a huge dollhouse, the First Lady's inauguration gowns, and (of course) Julia Child's kitchen.
Then I headed over to the Holocaust Museum. I went when I was in 8th grade (it had opened not long before then), and haven't been back since then. I actually only spent about 2 or 2 1/2 hours in the museum. It's a tough museum to go to, and you could honestly spend about 6 hours in here to see and take it all in. I wanted to move through quickly for two reasons: first, I wanted to leave for the airport around 5ish (because I had a Latin test to study for!), and second, because I am pregnant and emotional, and I don't think the other people in the museum would like to see a 6 month pregnant woman crying in the middle of the museum.
If you have never been to the Holocaust museum, you really, really need to. Like I said, it is really hard, but I think it is a necessary hard. Kurt Vonnegut said that "those who forget the lessons of the past are condemned to repeat them." And, as seen in Rwanda and Darfur, genocides have not ended.
A few things stuck out to me this time, that maybe didn't my first time. The first was, while watching a video of concentration camp survivors, one survivor talked about a fellow prisoner. He saw the prisoner praying, and asked him why, when it was too late for morning prayers and too early for night prayers. The man said he was thanking God that he was not like the murderers around him. From the man''s tone, I don't think this was similar to the pharisee's prayer. I was touched by how even surrounded by so much death and horror, this man still was praising God.
I was also struck by the stories of how other countries responded. I was reminded again about how other countries (including the U.S.) ignored and refused to help when they knew (maybe not to the full extent, but at least partly) what the Nazis were doing. But one country did help, Denmark. And that makes me so happy to know that Jack will have Danish blood running through him. 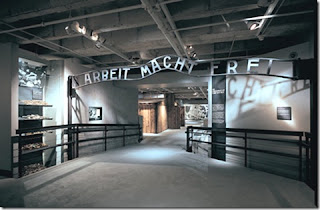 All these pictures are from offline--you aren't allowed to take pictures in the Museum. This is a remake of a sign above one of the concentration camps. 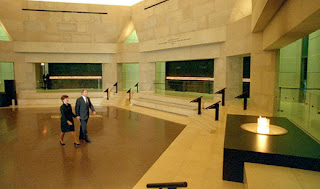 This is from the Hall of Remembrance, where an eternal flame burns in memory of the 6 million Jews killed by the Nazis. 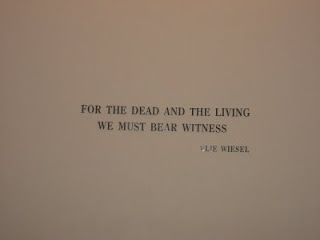 That's it. Bech has to go to PSU now so that you and I can do a DC weekend. It is decided.

i like the Vonnegut quote, but i think Cicero more accurately captured the nature of the ignorance of history: "Not to know what happened before you were born is to remain forever a child."

Sounds like you had a wonderful trip. I haven't yet been to the Holocaust mueseum but I definitely need to get up the courage to go. Reading this post makes me want to read Night again. What a good book.