So this update is about, oh, a week and a half late!  But I really want to have these for my records so I'm still going to do this month's update.

Jack is 6 months old!  I cannot believe he is already half of a year old! 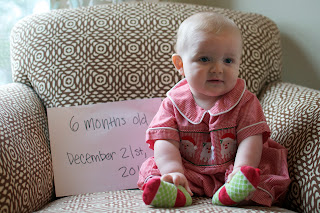 This past month was a really big month for Baby Jack.  He got his first two teeth, one right before Christmas and one right after.  He had a few times, but overall he was pretty non-fussy, considering.  Everyone always makes teething sound like such a nightmare, but Jack handled it really well!


Jack is also eating solids now.  We started him with rice cereal, then after five days added a vegetable, waiting another five days for a fruit, etc.  So far, he eats: carrots, apple, green beans, pear, and sweet potato.  Strangely enough, I think green beans might be his favorite.  He really likes to eat (are we surprised at all?) and does great with it.  We feed him fruit in the morning (about 30 minutes to an hour after he nurses) and rice cereal mixed with a vegetable about an hour before he nurses at night. 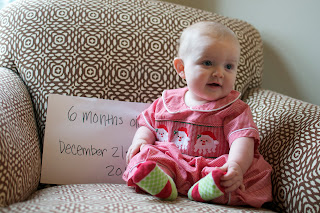 *** random sidenote:  I am actually totally torn on the whole pacifier thing.  We used to only use it in the crib if he woke up early from a nap or in the middle of the night.  But then one day I went to wake him up from a nap, and he had it in his mouth.  He found it all by himself in the crib and stuck it in his nap.  So since then (maybe 3 weeks ago?), I have just given him the pacifier when he goes to bed.  Any thoughts?  I don't want to have a 3 year old who can't drop his pacifier, but he doesn't seem overly attached to it.*** 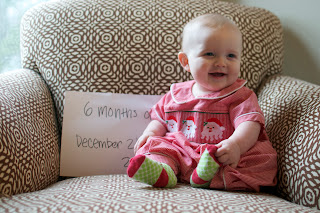 Jack went on his 3rd plane trip this month!!!  He is such a good flyer.  I flew home with him by myself (Bech flew back with us), and he did great.  He is a pro!

And this month was Jack's first Christmas!  I think he loved it.  Actually, he probably just loved all of the attention he got from grandparents, great-grandparents, and aunts and uncles.  We all had fun having him there on Christmas! 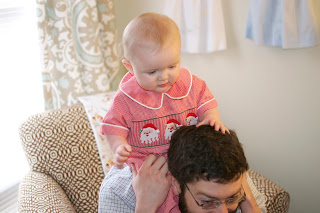 We weighed Jack at my dad's office while we were home, and he weighs a little over 20 lbs.  So he has actually slowed his weight gain down and dropped a little in percentile.  I think his face looks slimmer (you'll see it in the month by month comparison pictures at the end).  I'm not sure how he is on height.

He wears 6 to 9 month clothes, although there are a few 6 month outfits he still fits in (mostly "Remember Nguyen").  He wears a size 3 diaper. 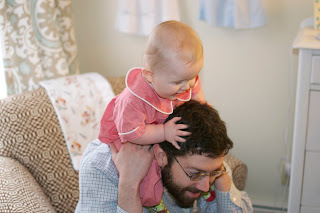 I know I am so biased, but he has the sweetest personality.  He is such a content and happy baby!  He loves to cuddle and to laugh.

He is starting to get the slightest bit clingy towards me.  It usually only kicks in if it's close to his nap time.  I love when he wants me to hold him, but I don't want it to get too bad.  I hate the thought of him crying for me as I drop him off at the church nursery or daycare. 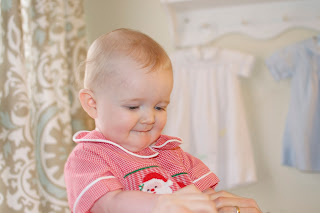 Likes:  eating, cuddling, all of his new Christmas toys (especially Sophie the giraffe), being tickled

Dislikes: being back in Vermont away from family :( (Okay, maybe that's my dislike, but I know he is missing all of the holding, playing, and attention!)

And finally, a comparison of the past 6 months...I love this little guy so much!

Posted by Bech and Marley Evans at 3:02 PM

He is precious, the most smiley baby ever!! Sophie the Giraffe was Abby's favorite toy at that age, too. We even based her first birthday party around her love for Sophie. Happy 6 month birthday, Jack!!!

Don't even worry about the pacis girl! Paige was obsessed with them and the paci fairy came and took them away a few months after Presley was born. The paci can be taken away, a thumb cannot!!!