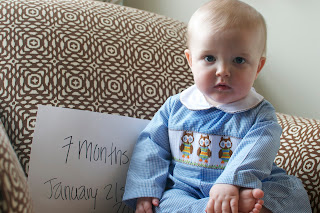 This past month is the start of Jack's first (and last) Vermont winter...it has been COLD!  But Jack has mostly been snuggled up warm indoors. 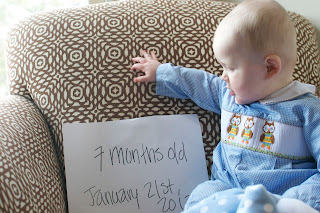 Except for getting sick, this has been a really calm month for Jack.  Mostly we have just cuddled and played.

Jack is still sleeping from about 7:30 p.m. to 7 a.m.  We had a few nights when he was sick that were awful, but he's back on track.  Thank goodness...I need my sleep!

Jack got his first ear infection this month, but he has already been acting much more like his normal self. 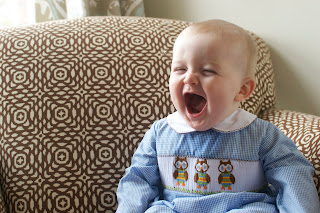 Jack is doing great eating solids.  He eats green beans, peas, sweet potatoes, carrots, apples, pears, bananas, and rice cereal.  I thought he just liked food in general, but he absolutely hates peaches!  I personally think its the texture.  Whatever the reason, he never wants to eat them. 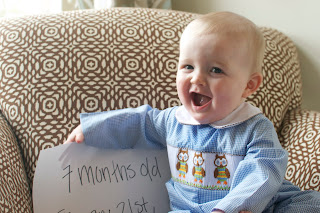 Jack started waving toward the end of this month, which is pretty darn cute.  He doesn't seem to be that close to crawling.  Sometimes at night, he'll pull his knees up under him in a crawling position, but that's about it.

Jack also started dancing this month.  He loves to listen to music and he'll move his little body and head back and forth to the music. 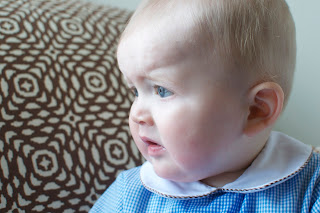 (how sweet are his cheeks?)

One thing that's fun: Jack has started making "boy noises," vrooming and whatnot.  I love all of his little noises!

Jack weighs about 20 lbs (he lost some weight being sick), and is 27 3/4 inches tall.  He is in between sizes right now--he still wears some 6 to 9 month clothes (and even some smocked 6 month outfits), but is starting to wear his 12 month clothes.  He still doesn't have much hair, but the little he has looks like it's going to be blonde (I thought he might be a redhead for a while there).  And those eyes are blue blue blue! 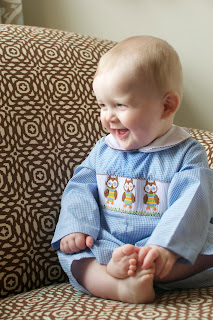 Likes:  cuddling, eating, bath time, chewing on any and everything, dancing, music

Dislikes: getting his diaper changed, peaches 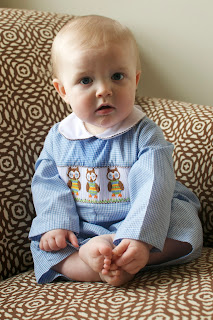 agghh I just want to squeeze him!

Aw, look how big he's getting! Marley, I never told you, but you won my digital scrap booking giveaway a couple weeks ago! If you could just e-mail me at throughcloudedglass@gmail.com, I'll send you the free promo code! Congrats!