So, this is definitely a few days late.  But, I'm still doing it, because I want to look back at these!

Jack weighs 17 1/2 lbs (and that was a week ago, so let's be honest--he weighs more by now!).  He is a big and tall baby!  He eats 6 times a day, about 5 oz each time.  He is still EBF.  We are going to wait to add in solids until 6 months.  My dad and our pediatrician (who we love) both advice waiting that long. 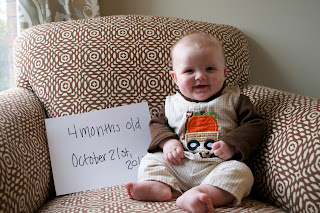 Jack still has a dream feed (now around 10:15), but we've been slowly moving it earlier.  In fact, I might try for 10:00 tonight!  Hopefully in the next monthor two, we'll have dropped it and he'll sleep 11 hours straight!

Jack is in size 3 diapers (although they're a little large) and he is almost out of his 3-6 month clothes. 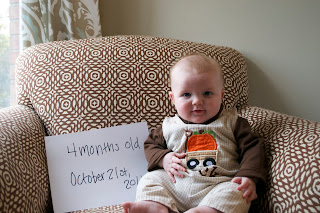 Jack is getting to be more and more fun to play with!  He will laugh and laugh.  He loves playing with toys and being tickled.

I would not be surprised if we have a tooth or two poking through by 5 months.  He has been chewing on everything and drooling like there's no tomorrow.  I can't feel anything yet, though.

Jack had a big month--he flew down to Mississippi again and went to his first Ole Miss game (well he sat in the grove, but that counts!).

He also went to the pumpkin patch and apple picking. 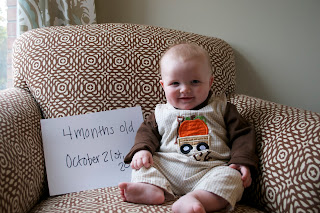 Likes: laughing and playing, baths, cuddling (I love having a cuddly baby!) 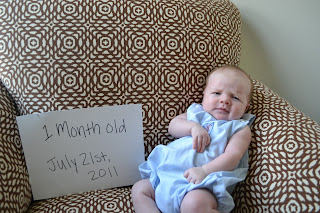 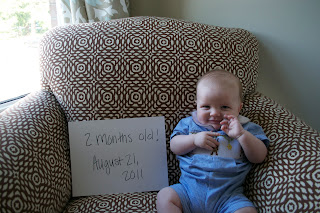 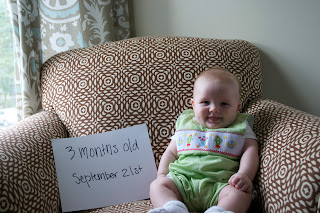 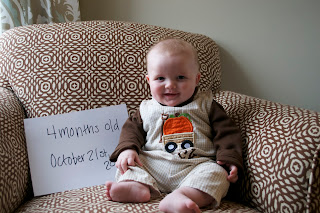 I love my little chunk!!!

Posted by Bech and Marley Evans at 1:41 PM

He is such a cutie! And I love his little pumpkin fall outfit.