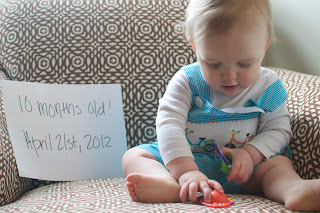 And because he has lost weight (well not really...more like stopped gaining it super fast!), he can still fit in some 9 month clothes.  Mostly, though, he wears 12 month sizes. 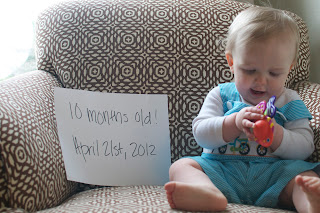 His sleep has still been a bit off this month.  He is waking up at 5 pretty consistently.  We have tried some of ya'lls suggestions (thanks!), but to no avail.  So the past week, we have been crying it out.  He only cries for a few minutes, then falls right back asleep.  He takes two naps a day, averaging about 1 1/2 hours for each.

He still just has his bottom two teeth, but the top two are near the surface.  I wonder if that could be waking him up at 5?  He doesn't seem too bothered by them during the day.

He can crawl really well and pull up on everything.  He is all over the place!  He loves to walk along on furniture, and he can even stand by himself for a few seconds at a time.  But then he always realizes what he's doing, gets scared, and sits back down! 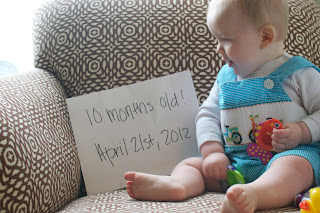 Jack still loves to eat!  He nurses (or takes a bottle at daycare) 4 times a day and eats solids 3 times.  He loves yogurt and puffs.  The past week or so, we have tried to give him more table food.  He has eaten banana, beans, naan, bread, raisins, and pasta with pesto.  He likes almost everything he has tasted (although I think some of the Indian food he tried last night was a little spicy for him!).

He still likes to rock out to music.  He also loves to clap.  He claps for fun and he also claps to say "more" (he doesn't quite have the hand coordination yet needed to do the sign correctly).

He is still about the sweetest thing ever.  He loves to snuggle and he loves to laugh!  And we love him! 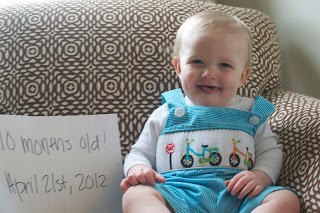 Likes:  his lovey (he has gotten so attached to it the past few weeks!), books, his Very Hungry Catepillar stacking toy, bathtime

Dislikes:  being told "no," getting his diaper changed

He is so sweet!! I have a Jack too. Mine is 8 months and changing his diaper is like torture to him. I feel like I am wrestling an alligator!!

He is so cute! You'll have to let us babysit him when you move back South! Seriously! Ellie and Abby would love, love, love it!